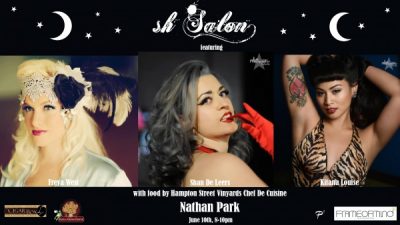 Freya West:
Is a body positive, shimmy shaking, fire eating performance artist, writer and teacher.
She began her burlesque warrior journey in 2008, learning from the best in the business, Michelle L’Amour. Since then, she moved to Nashville, TN, and now produces and performs with Music City Burlesque, and started her finishing school for fierce ladies, Delinquent Debutantes, in 2010.
She’s taught more than 300 women the power of the shimmy in my burlesque classes. They’re yoga teachers, soul searchers, entrepreneurs, and corporate vixens.

Shan De Leers:
Is a Professional Captivator and Bawdy Confidence purveyor based out of Nashville Tennessee.
She spends her time as Studio Manager at Nashville’s only Burlesque Finishing School Delinquent Debutantes, where she produces Nashville’s only UNCENSORED monthly burlesque revue, bringing naked dancing dames to Music City. Shan is a performing member of Nashville’s blockbuster Music City Burlesque.

While those closest to her confirm that she is, in fact, a proud Texan who has lived in Nashville for almost a decade now, the background of her family and culture remain a mystery. Rumor has it that the young starlet comes from a line of powerful Spanish conquistadors who were bewitched by beautiful Island maidens somewhere in the Pacific many years ago.

It is said that her name, Kitana, is an homage to the long line of conquerors and warriors from which her father came. The famous “katana” sword, was a reinvention of the ancient Japanese Samurai sword dating back to the 14th century. This sword differed in that, unlike it’s predecessors, she was worn in what is now known as “katana style,” with the blade facing toward it’s warrior. Traditionally, Samurai swords were worn with the cutting edge face down, away from it’s wearer.

As the story goes, the showgirl’s family and friends noted her prowess and passion even in her youngest years, and with a slight twist on the historical sword’s title, she was gifted the beloved name, Kitana Louise, because of her ability to fearlessly take the stage, and life, “cutting edge up.”

You all know the format!
Three performers
No Stage
Q & A session
Food and Drink

The food part of the format has evolved for 2016. Along with the performers, we are highlighting local chefs/restaurants. Thats right, we are partnering with some of the best talent in the culinary fields here in Columbia SC. We are applying the same concept to them that we do to our performers; they cook what they absolutely love to cook (may be on a menu somewhere, may not) and then they tell you why they do what they do (what makes them tick and so on) and a Q&A session.

Pertinents:
Tickets are $50, includes show, food, and drink.
Tickets can be purchased at Frame of Mind at 140 State Street prior to the show or online at http://www.brownpapertickets.com/event/2544853. The tickets are limited availability, so we suggest you get them as fast you as can (thus “day of” tickets almost never exist).

Tickets are $50.
The tickets include Show, Food, Drink, and Q&A session.