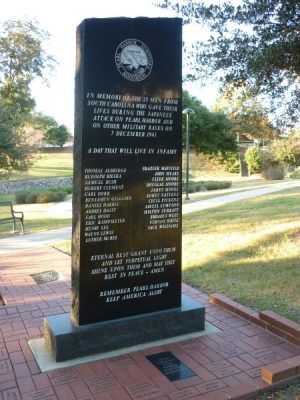 Dedicated September 2, 1995. This monument, dedicated by the members of Chapter 1 South Carolina Pearl Harbor Survivors Association, was erected in memory of the men who gave their lives during the attack on Pearl Harbor and other military bases on December 7, 1941. It is a tribute to all U.S. military personnel on this day of infamy. The names of the men from South Carolina who gave their lives during the attack are listed on the back side of the monument. Commemorative bricks with the names of Pearl Harbor survivors – “wives, widows, sons, daughters” – are featured on the brick walkway leading to the monument.