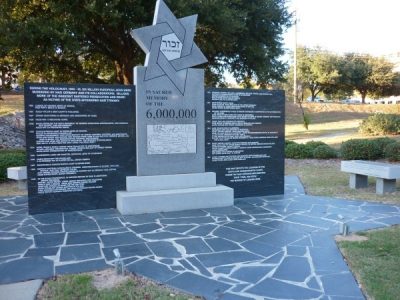 Dedicated June 6, 2001. This monument was erected “in sacred memory of the six million” who “suffered persecution and death as victims of the state-sponsored Nazi tyranny.” The front side of the monument features a timeline of events during and leading up to World War II and a map depicting the locations of the Nazi concentration camps. The back side of the monument features the names of liberators and Holocaust survivors from South Carolina. Benches encircling the monument are inscribed with quotes from survivors and liberators.