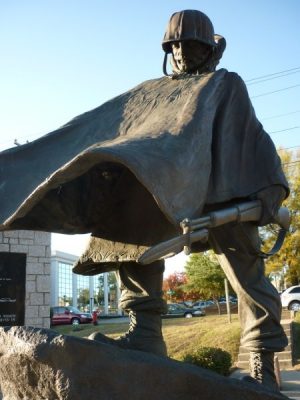 Dedicated June 24, 2000. This monument was dedicated to the men and women of South Carolina who served in the Korean War. The enscription on the monument’s plaque reads, “On the 50th anniversary of the beginning of the war, the grateful citizens of South Carolina dedicate this memorial to those men and women and their families in remembrance of the sacrifices they made. This monument features a sculpture of a soldier walking up a hill, dressed in a rain poncho being blown forward by a gust of wind and carrying his bayonet. The official crests of all five branches of the military – Army, Navy, Air Force, Marine Corps, and Coast Guard – are set in bronze in the stone around the statue.