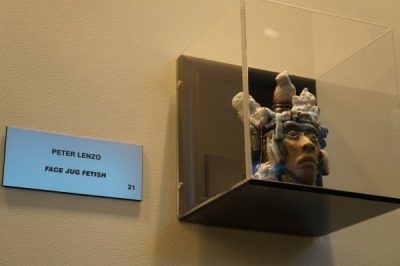 This piece was inspired by folk art and southern face jugs.

The making of Southern Face Jugs is a ceramic tradition that has been dated back to the 1840s or 1850s. This pottery tradition continues to be of significant interest today for many contemporary pottes living in the south. Southern Pottery Workcenter and Gallery highlights the work of twenty potters who make face jugs.

Sometimes known as ‘ugly’ or ‘grotesque’ jugs, face jugs were thought to have begun in Edgefield County, South Carolina. The potters who made them were African American slaves. These potters made face jugs after the work of making functional pottery such as churns and storage jars had been completed for the day. Many historians believe there may have been a spiritual or ceremonial connection to the face jug for these potters.