Take a tour of the revitalized City Hall today! 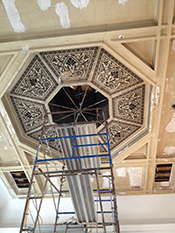 The City Hall building, which was orginally built by the federal government as a Court House and Post Office, has a rich and fascinating history. Designed by Supervising Architect of the Treasury, Alfred Bult Mullet, in 1870, the new court house was designed in a stately Renaissance Revival style which reflected a national trend in architecture that was not prominent in the capital city. Built by the Federal Government just a few years after the Civil War, this structure was a new chapter in Columbia’s history and its’ evolving streetscape. Read more about City Hall’s history here.

Mullett’s work has only been appreciated almost a century after his death. Renovations of this building in 1973 revealed his original drawings, which are now at the South Carolina Department of Archives and History. By the mid-1900s almost half of his buildings had been demolished.

This building was threatened with demolition in the 1930s when the federal government wanted to build a new courthouse. They had already constructed a new post office on Gervais Street in the early 1920s, which is now the Supreme Court building. The City of Columbia’s mayor proposed a swap for the land next door, and this became City Hall in 1937.

Renovations to restore this historic building began in May 2013.  The gorgeous skylight was covered by multiple drop ceilings, and visitors to the refurbished City Hall are the first to see it in decades.  The large windows along the west and east walls were bricked up, and most of the original crown molding was damaged. The original color scheme cannot be definitively determined, but paint analysis showed a green wall color and vibrant orange-red on the ceiling.