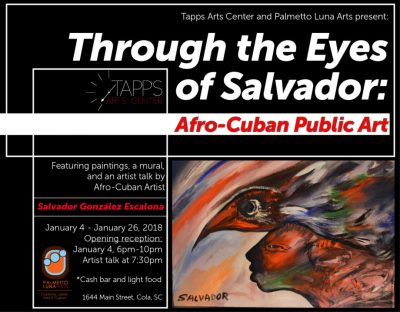 Through the Eyes of Salvador: Afro-Cuban Public Ar...

Tapp’s Arts Center and Palmetto Luna Arts are pleased to present: Through The Eyes of Salvador: Afro-Cuban Public Art.

Salvador– as he is affectionately known in the Cuban art world – is best known for his public art works which have transformed  the Callejón de Hamel, an area located in the working-class Havana neighborhood of Cayo Hueso, into an explosion of color, story-telling, community pride, and inclusivity.

Salvador began this work in 1990 when he created a living temple to the Orishas of Yoruba tradition. Significantly, this was two years prior to the historic lifting of restrictions on public expressions of popular religiosity in Havana.

His work can be described as a mix of surrealism, cubism and abstract art. His practice immerses every facet, crevice, and bend of the neighborhood. It covers each corner of the winding streets in poetry, murals, sculpture, motion and spirituality, scaling four-plus stories of the surrounding apartment buildings. Popular local history and religious traditions are echoed in his creation, from the toques de tambores (drumbeats) and rumbas that are the soul of the neighborhood, to Abakuá initiation rituals, manifestations of spiritism, and the everyday practice of Santería and Palo Monte.

Salvador will bring a piece of this magic to Tapp’s Arts Center through his paintings, murals and community development and will present a talk on First Thursday (January 4th, 2018) on his practice, his neighborhood and his experiences as an artist in Havana.