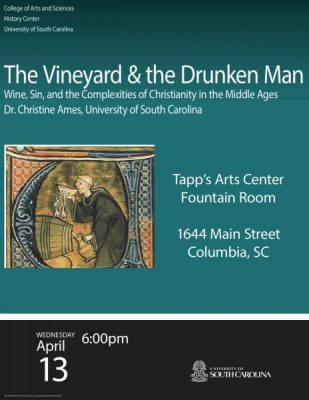 "The Vineyard and the Drunken Man"

Please join us on Wednesday, April 13, for our second Faculty Spotlight lecture, featuring Associate Professor, Christine Ames, who will be presenting “The Vineyard and the Drunken Man: Wine, Sin, and the Complexities of Christianity in the Middle Ages.”  The event will be at 6:00 in the Fountain Room at Tapp’s Art Center and will offer a cash bar.

Dr. Ames is a historian of medieval Europe with a particular interest in the history of Christianity, heresy and inquisition, and inter-religious relations. Her articles have appeared in The American Historical Review, Heresis, History Compass, and Comitatus, and her book Righteous Persecution: Inquisition, Dominicans, and Christianity in the Middle Ages was published by the University of Pennsylvania Press in 2009.  She is also currently working on two books.  One a textbook for the Cambridge Medieval Textbooks series and the other,  Blood of the Vine: A Religious History of Wine in Medieval Europe, for which she spent  2011-2012 in  Bordeaux, France, as a Fulbright Research Scholar.