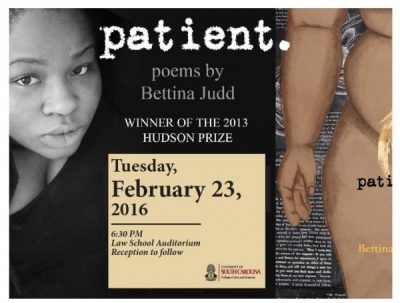 Lecture and Reading by Bettina Judd, author of Pat...

Presented by USC WOMEN'S AND GENDER STUDIES at Petigru 111

“In Patient Bettina Judd beautifully (and horrifically) draws on historical

scholarly explorations of the body and the archive, and personal medical

history. The result is haunting in its insistence on laying bare these stories as

black women’s experiences with the U.S. medical complex in the present.

Patient is a brilliant meditation on race, gender, and science and a thrilling

titled Patient, which won the Black Lawrence Press Hudson Book Prize and was

released in November of 2014.  Patient includes poems examining the work of J.

Marion Sims, 19th century physician who operated on black women  and who is

Judd will also be reading during the Deckle Edge Literary Festival in Columbia,

Born in Baltimore and raised in Southern California, Bettina Judd is an

interdisciplinary writer, artist and performer. She is an alumna of Spelman

College and the University of Maryland and is currently Visiting Assistant

Professor of Gender, Sexuality and Women’s Studies at the College of William