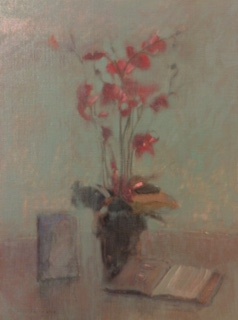 Gallery West, located at 134 State Street in West Columbia, will host a special exhibition of recent work by artist Will South from January 26 through March 13, 2016. A wine and hors d’oeuvres Opening Reception will be held at the gallery on Tuesday, January 26 from 6:00-9:00 pm.

Will South has become known on the Columbia scene over the past four years for his work at the Columbia Museum of Art, but also for his role as a painter in his own right. Wearing two hats, in Will’s view, is fine “as long as the hats fit.” As a museum curator, Will is known for making art accessible, whether in writing, on the wall, or in public talks. He shares his passion for art freely, and sees museum work as an ongoing opportunity for public service. Back in the studio, however, he reverts to the artist who has made art his entire life, only now one who has learned a great deal from art history.

In a number of his most recent paintings, the influence of art history is out in the open. One painting features a lounging cat with a painting by the great Italian modern Modigliani in the background. The Modigliani is interrupted by a floral spray, and the entire image is in a blurred, smoky light. There is no specific message here (or in any of the work, according to the artist) other than the poetry of the moment. The Modigliani in question sold recently for 170 million dollars, but the cat sharing its space is completely unconcerned. The atmosphere is one of quiet and detachment, where, for the artist, what is depicted supports the mood first and foremost.

In addition to oils on canvas, Will is a prolific draftsman and a number of recent figure drawings will be featured. His attitude toward figure work is unabashedly selfish: “The world doesn’t need any more figure drawings, but I do, and so that’s why I make them. There is a world of difference between hearing someone sing and singing yourself. Happily, in the shortness of life, we get to do both.”