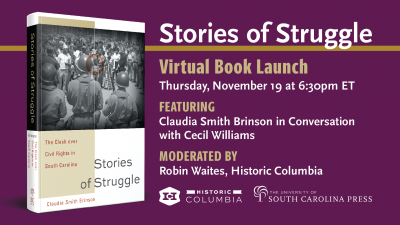 In this pioneering study of the arduous struggle for civil rights in South Carolina, longtime journalist Claudia Smith Brinson details the lynchings, beatings, bombings, cross burnings, death threats, arson, and venomous hatred that black South Carolinians endured—as well as the astonishing courage, devotion, dignity, and compassion of those who risked their lives for equality. Through extensive research and interviews with more than one hundred fifty civil rights activists, many of whom had never shared their stories with anyone, Brinson chronicles twenty pivotal years of petitioning, preaching, picketing, boycotting, marching, and holding sit-ins that altered the landscape of civil rights in South Carolina and reverberated throughout the South.  visit uscpress.com/Stories-of-Struggle

Claudia Smith Brinson, a newspaper journalist in South Carolina for more than thirty years, spent much of her career with Knight Ridder media company as a senior writer, writing coach, associate editor, and columnist. She taught writing at the University of South Carolina and directed the Writing for Print and Digital Media major at Columbia College. Brinson won more than thirty state, regional, and national awards, including Knight Ridder\’s Award of Excellence and an O. Henry Award for short fiction, and she was a member of the Pulitzer finalist team covering Hurricane Hugo.

Cecil Williams was photographing the petitioners in Clarendon County as they lit the torch of freedom before he was 12 years old. In 1955 he became the youngest-ever JET Magazine photographer. He designed a solar-operated home featured in EBONY; an energy-light impulsive roof-top device; and the Filmtoaster, a device now used around the world to digitize film. He is the founder of the Cecil Williams South Carolina Civil Rights Museum, is a non-profit organization that shares his vast image collections.

Robin Waites has served as the executive director of Historic Columbia since 2004. During her tenure she has overseen the transformation of the historic buildings and grounds, established an expansive community engagement program in Columbia and Richland County, and has been central to a number of major historic preservation efforts.

Tickets are free but registration is required.  Visit bit.ly/34V76i4