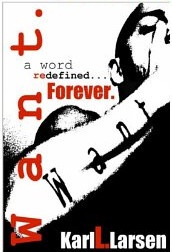 Join author Karl L. Larsen for a very special night. To commemorate his book, W a n t. & its 4-year anniversary, exactly 111 books will be released, including 10 copies of the elusive Black Book & “Red-Handed”, a one-of-a-kind, hand-painted edition.

In addition to the release of his books, Karl will be decorating Frame Of Mind with red, black & white for the opening of his very first art show, entitled “I’ve Had Worse.”

If that’s not enough, Preach Jacobs will be mixing up, Anthony Lewis will be painting LIVE to close his show & MORE.

Beer & wine will be available. See you there!