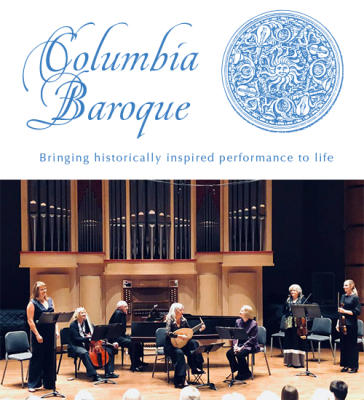 Columbia Baroque is a professional chamber ensemble in Columbia, SC. We are comprised of leading Baroque music specialists from South Carolina and North Carolina, each with distinguished careers as chamber musicians, teachers and soloists. We present spirited performances with varying combinations of voice, recorder, violins, viola da gamba and harpsichord. Our ensemble brings to life historically inspired and expressive chamber music of the Baroque period (ca. 1600-1759) on instruments of the period at low-pitch and utilizing historic tuning.

We performed our first concert in October 2007. The following March, a three-concert festival of music by J. S. Bach was presented. During the following three seasons, we presented a concert series comprised of three performances. Our concert series was increased to four concerts during the 2011-2012 season. In December 2010, Columbia Baroque was incorporated and in 2011 we were designated a 501(c)(3) non-profit corporation. In 2017 we established one concert location, the University of South Carolina School of Music Recital Hall, for our concert series performances. We are grateful to Dean Tayloe Harding and the USC School of Music for their wonderful support of our concert series.

Our mission statement, “Bringing Baroque music to life for the modern audience through education and historically inspired performance,” defines our programming. Our concert series performances feature pre-concert talks, “Concert Conversations,” presented by USC music history faculty scholars. Admission to our concert series performances is free for all students. We perform run-out concerts at locations throughout the Midlands and beyond. In our most recently completed season, run-out concert locations included the Columbia Museum of Art, Sumter County Cultural Commission, and St. John’s Church in Florence, SC. In addition to pre-concert talks, we provide educational opportunities for persons of all ages including Interactive Baroque Recorder Demonstrations for elementary school children (in collaboration with the South Carolina Philharmonic’s Link Up Concerts and South Carolina Arts Commission grant-supported), concerts for elementary and middle-school students including the Tri-District Arts Consortium, and a Summer Recorder Institute featuring a series of weekly master classes for adult and youth recorder players and auditors. We collaborate with the USC School of Music for our guest artists and ensemble members to present master classes, USC Colloquium talks and classroom visits for USC School of Music students. Our educational concerts have included a collaboration with the Suzuki Strings at USC.

USC School of Music Recital Hall, 813 Assembly Street, Columbia (MAP)
Our apologies, but this concert has been cancelled due to the current health crisis. We will update you when we have more inforrmation.