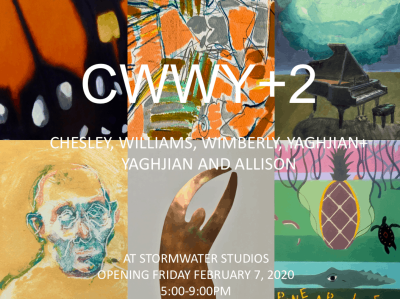 Chesley, Williams, Wimberly, Yaghjian+Yaghjian and Allison The foursome of Stephen Chesley, Mike Williams, Edward Wimberly, and David Yaghjian join together again this year with Ellen Emerson Yaghjian and Guy Allison to present an exhibition at Stormwater Studios. The opening is Friday, February 7th with a reception from 5-9pm and the show runs through Sunday, February 16, 2020.

Stormwater Studios, 413 Pendleton St., adjacent to Lewis and Clark and One Eared Cow, is in Columbia’s Huger Arts District (This is the 16th year for the original group.)Stephen Chesley … “There is an underlying imperative in nature, perhaps it has always been so. That is to say–the beauty of nature and its relegation on earth as an inexhaustible commodity– is an exponentially accelerated pathological delusion. The landscape is a reminder that we must strive to live good lives.” Mike Williams … will present a selection of two and three dimensional works from the past twenty years never assembled before. Edward Wimberly…returns with a large cabbage in conversation with a truly grand piano, along with other disruptive, engaging show stoppers. “ I think of a good picture as a kind of mental tool, possibly useful to help understand some puzzling phenomenon. There are many mysterious things and situations in life and one never knows what might help. I paint images that seem tome promising.” David Yaghjian…enjoying his new studio at Stormwater Studios, spending as much time there as possible, as he considers inter species relationships in painting, sculpture and printmaking.  The bonobo, who appeared 8 years ago, continues to commiserate with and contemplate his cousin. Ellen Emerson Yaghjian …”burning away the distraction an action appears. With explorations free of rules I move in not knowing to creating.” Guy Allison …painting since the dark ages, uses line, color and humor — “Every picture tells a story.”