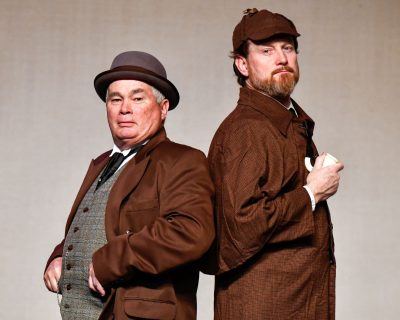 You may think you know the story based upon Sir Arthur Conan Doyle’s The Hound of the Baskervilles. But, wait! You don’t know THIS version.

All the pieces of a classic Holmes’ mystery are there ~ untimely demise, suspicious folk, barking dogs, ex-cons, stolen clothing, missteps galore, love-at-first-sight, secrets and escapades through London. Yet, you’ll also experience Ken Ludwig’s humor as he introduces you to Holmes and Dr. Watson. The witty tale surrounds the male heirs  of the Baskerville line who are being dispatched one at a time. To uncover the killer, Holmes and Watson face a web of clues, disguises and deceit.

In a feat not often seen, the production’s other three actors take the remaining 40 characters. Scott Hull (My Fair Lady, Willy Wonka), Corey Langley (Hello, Dolly!, Matilda) and Town newcomer Carly Robinson will do nothing less than amaze and tickle your funny bone. The intrigue of this show is not only in solving the crime, but in meeting the array of imaginative (and often hilarious) characters
unveiled with each step.

Tickets can be purchased at towntheatre.com or by calling the box office at 803-799-2510. The box office is open M-F 12 noon – 5pm weekdays, with hours extended to curtain on show days.