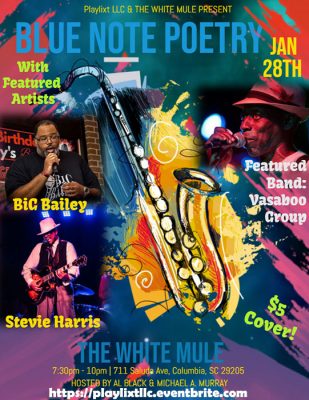 Presented by Playlixt LLC at The White Mule

We kickin’ off 2020 with a certified BANG in a brand new edition of Blue Note Poetry Beautiful People, this time featuring Aiken Spoken Word heavyweight BiG Bailey and the superbly smooth Blues singer from Sumter, Stevie Harris!!! Of course the world-famous Vasaboo Group will be back in the building with the silkiest of grooves, and Imma need ALL you secretly-talented specimens who were too nervous to touch the stage in 2019 to finally give the universe what it’s been missing on the always exciting Open Mic!! It all goes down at The White Mule @ 7:30pm January 28th (YES we’re starting and ending on time lol), so come thru and bring eeeeevvvverrrrrrybody in your lovely crew with you!

BiG Bailey is a spoken word poet, hip hop artist, music producer, audio engineer, graphic designer, and computer technician who resides in Aiken, SC. He is also the President of SMS Entertainment. He is known to emphasize social consciousness and positivity through his music and poetry.
BiG Bailey is currently promoting his website www.bigbailey.com and his debut single No Neutral featuring Lolita Pierre & Sa Jules which was released on all major platforms May 10, 2019. He has also released a 15 track spoken word and hip-hop album titled Hey Fat Man.
https://tamell4k.wixsite.com/bigbailey?fbclid=IwAR3zntSiL6jHVa5rq-nVrFqkgl8lN6TmJcg5qeEp6PKHSJyf1JC9k5WhHvo

Formally from San Diego, Oakland, Sarasota, Cleveland, and Los Angeles, Stevie has toured through the U.S. and Morocco and also released several albums, most notably, Armeghetto, Black Will Not Hurt You and Old Soul.

Described by The Pulse of Portland as “Dreamy and daring, haunting and harrowing”.

The San Diego Tribune as “a bit of Jeff Buckley, Otis Redding and Muddy Waters.”

A song on the HBO series Weeds

And a publishing contract with Windswept Pacific

Here’s a link to some Stevie Harris Music

Stevie Harris performs his Originals and classic soulful covers with passion and skill, giving the audience a soulful recharge away from daily life.

Tickets for general admission are only $5 and are currently on sale. They can be purchased on Eventbrite using the link below, or at the door during showtime. There is limited seating, so it is highly recommended that attendees arrive early!