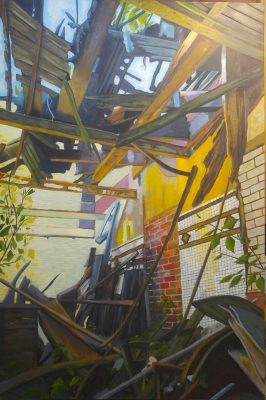 Frame of Mind is proud to present the artwork of Robert Keith IV. We invite you to come experience the power of Roberts interpretation of the abandoned space.

Frame of Mind is proud to present the artwork of Robert Keith IV. We invite you to come experience the power of Roberts interpretation of the abandoned space.

Robert Keith IV
My work is an investigation of abandoned architectural spaces that are gradually being reclaimed by nature as well as a study of the illusionistic aspect of creating three dimensional images on a two dimensional surfaces. By combining the two I am able to expose these spaces in their beautiful collapse.
I personally explore these structures to capture the mood and reality of the space as it existed when I was present. I document these structures via photos and sketches that result in drawings and paintings that further reflect the uniqueness and feeling of that space. In this series I employ methods of distortion by curving, stretching, expanding the way I depict the space as well as the canvas that they reside. These works are a way for the viewer to trespass with me in an uncomfortable but quite place.

Robert O. Keith IV was born in Denver Colorado in 1981. He received a BFA at Colorado State University in 2012 and an MFA at the University of South Carolina in 2016. He and his wife Meagan travel around the east coast searching for abandoned spaces to fill both an artistic need as well as the thrill of exploring.
Art was an escape for Robert as a child. The poor conditions in which he was raised mirror so many of the abandoned structures shown in his work. His rough upbringing gave him an intensely unique perspective on life, allowing him to find the beauty and the positive light in what others might find ugly or impossible to endure.
In his current work, Robert explores the reclamation of abandoned architectural spaces by nature. He documents the journey of exploration via oil paintings.

Roberts opening reception is Friday Sept 6th and he will be participating in the unique (signature) event Collectively Supported Art on Saturday Sept 7th (also hosted by Frame of Mind). The exhibit will be on display throughout the month of September.