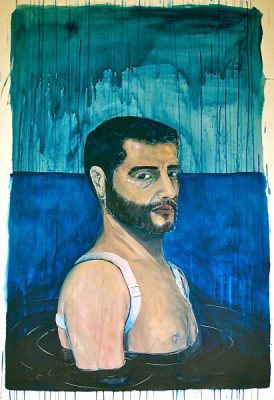 Featuring the work of 27 visual artists and 18 writers and poets.

Social media and the mobile web have given rise to a strange phenomenon called the selfie. This exhibition explores the wide arena of selfies, either from the perspective of the artist or writer themselves, or an alter ego, as if from another person, animal, mythical or fantasy character. It includes a broad range of contemporary art using all media in one, two and three dimensions, and will recognize artists and writers both emerging and established, internationally and from across the United States.

Writers share their visions of themselves in poetry and fiction. The literary component has been published in the form of a limited edition chapbook called, The Collective I. The submissions were juried and co-edited by Ed Madden, associate professor of English and Director of Women's and Gender Studies at USC, and Susan Levi Wallach, writer and poet, co-winner of the 2014 Thomas Wolfe Fiction Prize. Poet Samuel Amadon, professor of literature in the MFA Program at USC, judged the selected entries and awarded the Elizabeth and Toby Ward Literary Prize.

An evening of readings by participating poets and writers is planned for May. Please watch for an upcoming announcement for date and participants.