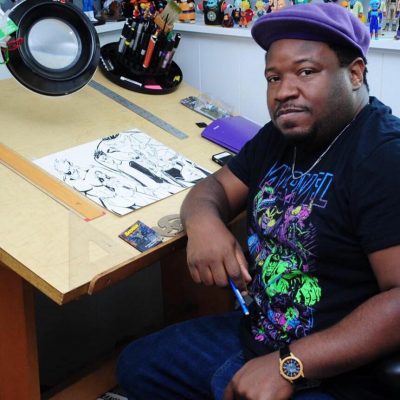 An ink and pencils maestro, Roc Bottom has garnered praise from hundreds for his stylistic and innovative approach to his craft. His creative works have been featured in The Underwire Online magazine with his creator-owned comic, Lion’s Den Revolution, the first comic to ever be presented in digital desktop format. Other comics credits include Trenchcoats, Cigarettes, and Shotguns for Conquest Comics, Queen of Sin and Master’s Devils for Legion Studios, and 803 from 803 Studios. Roc is a former member of Truthful Comics where his titles include, Order,  Shadowclub Karma, and Jet Boy: Dawn of K.R.O.N.O.S., a comic/animated series. Roc also has his hand in the fashion world as co-owner of One Cloth1ng and his new line Johnny Rocketz which features custom shoes and t-shirts.

Recently, Roc has partnered up with producer, Mustafa Saied, and writer JD Lawrence to start a production company that will produce original content for several networks and streaming services.  He is currently directing the animated project, Jet Boy, along with Mike Sofoluke, producing/writing the animated Shadowclub Karma project, and producing the Dark Goddess animated series.