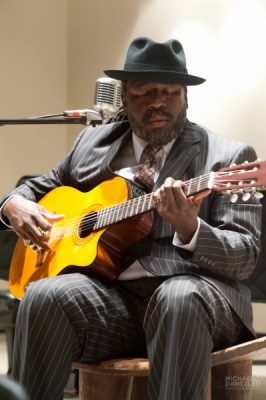 In the tradition of the Mississippi Delta Bluesmen, THE Dubber confronts the world with only a guitar and his words. The self- taught singer/songwriter continues reinventing himself by fusing the styles of a 30 year musical journey. Rock, Jazz and Funk, flavored with the International sounds of Reggae, Middle Eastern Music and Afro Beat, creates the complex stew that helps him express his blues in an innovative and distinct manner.

Since 2005, the Washington DC born/South Carolina based musician has been trailblazing through America with an honest and intimate stage show. His sophisticated one man band guitar style and universal message of ONENESS, keeps THE Dubber booked year round. Always a crowd favorite, he has played such prestigious events as the South by Southwest Music Conference (Austin TX) and the Mid-Atlantic Music Conference (Charlotte NC).

With radio airplay here and abroad, a U.S. and European tour, plus three albums under his belt, "In the Temple of…" 2005, "Global Warning" 2010 and the recently released "Cleaning Up The Dirty South" 2014. THE Dubber is currently touring the American South to promote the latest album now movement under the same title. Partially funded by the South Carolina Art Commission, this project has taken a life of its own due to the candid message he delivers on the status of social and cultural progressions since his 8 years living and touring the South.