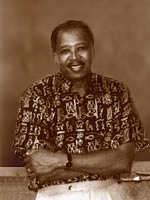 Leo Twiggs, from Orangeburg, is widely seen as the country’s main pioneer of batik as a modern art form. He is among the most important South Carolina artists since the 1960s. His art is about subjects, topics, issues and people close to his Southern upbringing. But through familiar specifics, Twiggs addresses broader themes, including race, black culture, politics and relationships between generations. He does so through modern imagery and narrative scenes that seldom are straightforward snapshots but abstracted, symbolic tableaus dominated by shapes, lines and fields of color. By the 1970s, Twiggs’ national reputation resulted in a several solo shows in the Northeast, including at New York’s Studio Museum in Harlem. He also has been in group shows featuring the country’s most famous African-American artists, including Jacob Lawrence and Romare Bearden. His career retrospective, organized by the Georgia Museum of Art, from 2004 to 2006 traveled to several venues, including the South Carolina State Museum. Twiggs’ work is in all prominent South Carolina museums, including the Greenville County Museum of Art. He was the first person to receive as an individual South Carolina’s highest art award, the Elizabeth O’Neil Verner Governor’s Award for the Arts.