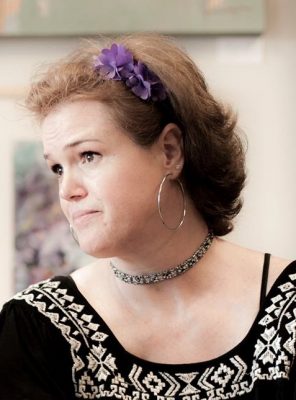 Sara Winsted is an abstract painter and sculptor from the Columbia, South Carolina area. With a background in Commercial Graphics, Winsted is mostly a self-taught, multi-media artist. Even though she has been creating art in various forms throughout her life, it was not until 2010, and after joining a local Columbia art guild that she began to recognize herself as a professional artist.

Internally driven and emotionally charged, Winsted’s artistic style has been described as being both “Thought Provoking  and Imaginative.”  Winsted works in a wide variety of mediums. When viewing her art for the first time one is under the belief that the works presented are the creations of several talented artists. The diverse works however are the efforts of just one. Explosive abstract paintings, contemporary mixed media, whimsical paintings and realistic sculptures are just some of the styles you will uncover when you delve into her portfolio of works.

Winsted currently serves as President of Columbia’s Trenholm Artists Guild (TAG) and teaches art to a local homeschool group. She also curates several exhibits throughout the area including The Gallery at The 1425 Inn and visual art curator for Southern Exposure New Music Series at USC.  She is currently working on illustrating a children’s book for a local author.