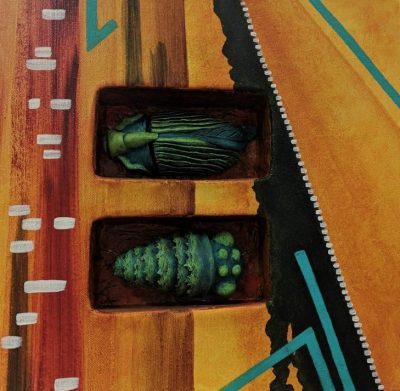 Frankie Wolf is a self-taught artist who has been practicing for over 50 years. She considers her work to be narrative and symbolic in nature, with an appreciation for abstraction and distortion. She looks for ways to capture the beauty of the strange.

Her work often explores her fascination with global mythology and guising which includes influences from folk art, horned deities, petroglyphs and wild man/woman representations. She also finds interest in the gritty imperfections of life, the gaps that are often overlooked and subjects that are not normally highlighted in the mainstream.

She was the featured artist at The Cellar in 1994 with Palooza People, which included a permanent mural and installation. Her solo show First Folk was held at the Koger Center for the Arts Donor Room in 1996. Between 1985 and 1998 she was invited to create numerous illustrations for local businesses and publications including a comic zine and various pieces for Columbia’s famed Rockafellas. More recently she exhibited her Tokens series at Cool Beans in 2016 and was the featured artist for USC’s Southern Exposure in 2018 with Duo Cortona.

She has just been accepted into the National Art Center, Tokyo for the second year in a row at the 25th Annual Salon Blanc International Exhibition of Contemporary Art, 2021. She is also in the process of establishing a personal collection called ‘Final Howl’ which will begin debuting its first pieces in 2021.