From the creation of Columbia by the South Carolina General Assembly in 1786, the site of Columbia was important to the overall development of the state. The Congarees, a frontier fort on the west bank of the Congaree River, was the head of navigation in the Santee River system. A ferry was established by the colonial government in 1754 to connect the fort with the growing settlements on the higher ground on the east bank.

State Senator John Lewis Gervais of Ninety Six introduced a bill that was approved by the legislature on March 22, 1786, to create a new state capital. 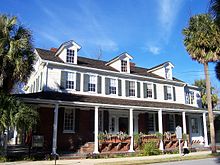 (Pictured at right: The Seibels House, c. 1796, is the oldest in Columbia)

The commissioners of the city designed a town of 400 blocks in a two-mile (3 km) square along the river with a magnificent network of wide streets. As one of the first planned cities in the United States, Columbia began to grow rapidly. Its population was nearing 1,000 shortly after the turn of the century. And much of it is now the subject preservation efforts and can be visited.

Columbia’s location made it an ideal location for other conventions and meetings within the Confederacy. During the Civil War, bankers, railroad executives, teachers, and theologians often met in the city to discuss matters. 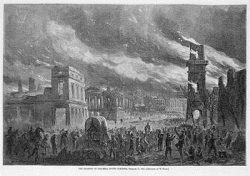 (Pictured at right: The burning of Columbia during Sherman’s occupation, from Harper’s Weekly.)

On February 17, 1865, during the Civil War, much of Columbia was destroyed by fire while being occupied by Union troops under the command of General William Tecumseh Sherman. According to legend, Columbia’s First Baptist Church barely missed being torched by Sherman’s troops. The soldiers marched up to the church and asked the groundskeeper if he could direct them to the church where the declaration of secession was signed. The loyal groundskeeper directed the men to the nearby Washington Street United Methodist church; thus, the historic landmark was saved from destruction by Union soldiers. Today, tourists can follow the path General Sherman’s army took to enter the city and see structures or remnants of structures that survived the fire.

The first few years of the 20th century saw Columbia emerge as a regional textile manufacturing center. In 1907, Columbia had six mills in operation: Richland, Granby, Olympia, Capital City, Columbia, and Palmetto. Combined, they employed over 3,400 workers with an annual payroll of $819,000, giving the Midlands an economic boost of over $4.8 million. Columbia had no paved streets until 1908, when 17 blocks of Main Street were surfaced. There were, however, 115 publicly maintained street crossings at intersections to keep pedestrians from having to wade through a sea of mud between wooden sidewalks. As an experiment, Washington Street was once paved with wooden blocks. This proved to be the source of much local amusement when they buckled and floated away during heavy rains. The blocks were replaced with asphalt paving in 1925.

The years 1911 and 1912 were something of a construction boom for Columbia, with $2.5 million worth of construction occurring in the city. These projects included the Union Bank Building at Main and Gervais, the Palmetto National Bank, a shopping arcade, and large hotels at Main and Laurel (the Jefferson) and at Main and Wheat (the Gresham).

In 1934, the federal courthouse at the corner of Main and Laurel streets was purchased by the city for use as City Hall. Built of granite from nearby Winnsboro, Columbia City Hall is listed on the National Register of Historic Places. Designed by Alfred Built Millet, President Ulysses S. Grant’s Federal architect, the building was completed in 1876. Millet had originally designed the building with a clock tower but large cost overruns caused it to be left out. Copies of Mullet’s original drawings can be seen on the walls of City Hall alongside historic photos of Columbia’s beginnings. 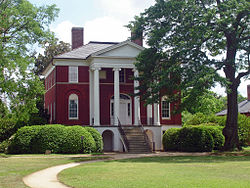 Historic preservation has played a significant part in shaping Columbia into the city that it is today. The historic Robert Mills House was restored in 1967, which inspired the renovation and restoration of other historic structures such as the Hampton-Preston House and homes associated with President Woodrow Wilson, Maxcy Gregg, Mary Boykin Chesnut, and noted free black Celia Mann. In the early 1970s, the University of South Carolina initiated the refurbishment of its “Horseshoe”. Several area museums also benefited from the increased historical interest of that time, among them the Fort Jackson Museum, the McKissick Museum on the campus of the University of South Carolina, and most notably the South Carolina State Museum, which opened in 1988.