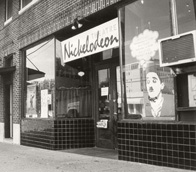 The production and presentation of film and movies creates a way for communities to examine and reflect on shared experiences, educate and simply entertain.

The theatre serves the entire community through daily screenings of film and video (primarily independent films and documentaries), community film forums where films are shown with post-screening discussions, several community film festivals and the annual regional Indie Grits Festival, named one of the coolest film festivals in the country by Moviemaker Magazine.

The new Nickelodeon will expand its strong track record in film exhibition to also include programming in the areas of media education and filmmaker services.

Most notable in the international film scene is Columbia native Stanley Donen (born, April 13, 1924), an American film director and choreographer whose most celebrated works are “Singin’ in the Rain” and “On the Town.” He received an Honorary Academy Award in 1998 for his body of work.

An important collection of historical film footage is located in Columbia at the University of South Carolina. The Moving Image Research Collection includes an estimated 6000 hours of material including a huge amount of the Fox Movietone News Collection and documentary films from the People’s Republic of China.

By the late 1930’s, Columbia’s Main Street supported five Main Street cinemas including the Palmetto, Carolina, Strand, Ritz and State (later Fox Theatre.) There were also two African American cinemas during the same period, the Capitol and the Carver. The only surviving structures are the Fox and the Carver.