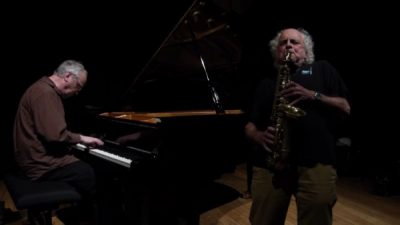 Trevor Watts is well known for his involvement with innovative music. In the 60's with the Spontaneous Music Ensemble and his own Amalgam. He went on to develop the unique sounding 10 & 14 piece Moire Music Groups in the 80's. Also the groundbreaking Trevor Watts Drum Orchestra in the 80's and moving towards the Moire Music Drum Orchestra of the 90's (ECM 1440 "A Wider Embrace"). Then Watts formed the Celebration Band, which was made up of young musicians who originally went to his workshops and he formed the band around them. For the last four years he has concentrated on a duo with percussionist Jamie Harris, this has now come to an end (Jan 2008). Latest CD of the duo is "Ancestry" on Entropy(USA)ESR 016. Trevor has played most of his life outside the U.K. and has taken bands to India, Singapore Arts Festival, China, Mongolia, Burma, Sarawak, Malaysia, Sudan, Cameroon, Botswana, Lesotho, South Africa, Australia, New Zealand, USA, Canada, Mexico, Barbados, Bahamas, Dominican Republic, Jamaica, St Lucia, Trinidad, Colombia, Venezuela, Bolivia, Ecuador, Brasil, Greece, Turkey, Azores Islands, Spain, Portugal, Slovenia, Croatia, Macedonia, Czech republic, Hungary, Poland and the rest of Europe. All under his own name!

Trevor has initiated some very important collaborations. The biggest being with his 7 piece Drum Orchestra and 28 musicians/actors/dancers of the black tradition of the Barlovento region of Venezuela's Caribbean coast. Their group was called Teatro Negro de Barlovento and the combined group project went under the name "Una Sola Voz" taken from one of Trevor's Moire Music recordings "With One Voice". And they played concerts in Europe and South America in the early 90's.

He has also performed with Archie Shepp, Don Cherry, Steve Lacy and Bobby Bradford who was the first trumpeter with Ornette Coleman. And from the UK Tubby Hayes, Phil Seaman & Stan Tracey from the Jazz World. He has also collaborated with Adama Drame, one of the finest Djembe players in the World, he is from Burkina Faso and Cyro Baptista the Brasilian percussionist who also plays with Wynton Marsalis & John Zorn amongst others.

Veryan Weston is best-known for his work with such British avant-garde musicians as vocalist Phil Minton and saxophonist Lol Coxhill. He moved from Cornwall to London at the age of 22, where he began working as a freelance jazz pianist. In 1975, he received a fellowship from the Digswell Arts Trust in Hertfordshire which allowed him to revise a book he'd written on piano improvisation. While at Digswell, he co-founded and composed for the group Stinky Winkles (which also included saxophonist Simon Picard), and collaborated with potter Liz Fritsch and visual artist Stephen Cochrane. He also composed and performed music for film, the most notable being his work with Lol Coxhill on director Derek Jarman's Caravaggio (1985). Weston's interest in multi-media presentations led him to earn a degree in performance art from Middlesex University. He also earned a master's degree in music composition from Goldsmith's College University in London. In the '80s and '90s, Weston worked with the Eddie Prevost Quartet and Trevor Watts' Moire Music, and in duos with Minton and Coxhill. Weston has recorded for the Matchless, Acta, Ogun, and Leo labels, among others. In addition to being a prominent free jazz-oriented musician, Weston is also an accomplished mainstream jazz pianist.