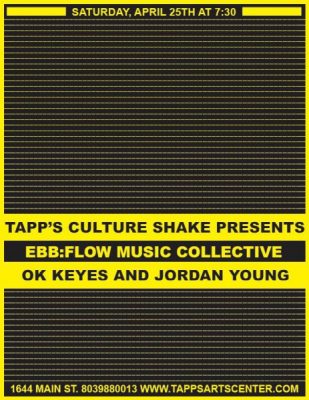 The ebb:flow music collective is back! This time, the collective is teaming up with local video artists OK Keyes and Jordan Young to bring you a truly unique experience: an evening of contemporary classical music paired with live video manipulation.

Beneath the Ice of Europa – George Fetner

The ebb:flow music collective is back! This time, the collective is teaming up with local video artists OK Keyes and Jordan Young to bring you a truly unique experience: an evening of contemporary classical music paired with live video manipulation.

Beneath the Ice of Europa – George Fetner

“…I sought to write something very simple and contained. Since the horn and vibraphone are based around the pitch F, they seemed like a good fit…Overall I sought to fuse the two instruments as much as I could. Their basic tone is mellow, but when stopped the horn can be quite ‘buzzy,’ as can the vibraphone when prepared with objects, such as a chain. Another interesting characteristic of the vibraphone is its motor, which adds an automatic tremolo at varying speeds. I reflected this with the recurring repeated-16th motif”. – Adam Scott Neil

Steven Mackey has established himself as one of the most gifted and original American composers to emerge in recent years. Born in 1956 in Frankfurt, Germany to American parents, he was raised and educated in the United States. His early training in performance was as a classical and electric guitarist and Baroque lutenist. Mackey is now Professor of Music at Princeton University, where he has been a member of the faculty since 1985.

Mackey’s idiom, a multi-layered world of rhythm and sonority, draws its expanded harmonic palette from western art music, its wit and vivacity from the imaginative transformation of popular music elements.

“Triptiek, for tenor sax, bassoon, and electronics…is divided into three movements, played without pause. There is a good deal of imitative writing throughout the piece. In each of the movements, one of the three instruments (electronics included) takes the lead…The piece is also rigidly (and archaically) composed around a reductive system based on a rising major second, which is present through the foreground, mid-ground, and background. This simple scheme, along with other elements, gives the piece a…structure of both a three-movement developing narrative alongside an ABA large-scale form, reminiscent of traditional approaches to triptychs in the visual arts”. – Peter van Zandt Lane

“Beneath the Ice of Europa uses original sounds from Max/MSP and processed keyboard and guitar sounds. The piece contains a cross-stitching of tremolo sounds of different registers and timbres, shifting the pulse beneath a largely improvised electric guitar part. The piece embraces octatonicism throughout.

Europa is a moon of Jupiter covered in ice that may still contain life in its ocean beneath the surface. I felt like this title accurately portrayed the intense sounds of plunging into a deep, icy, alien ocean”. – George Fetner

“In my early years of college one of my first jobs was to accompany modern dance classes. Frequently the professors would say “I don’t care what notes you play, just give us a beat…” and so I would, and I would try to throw off the dancers by stretching the tunes in odd manners over that beat. When I got the opportunity to write a work for Alarm Will Sound a group that can turn on a dime, I drew from this experience. I wrote Shadow Dancer a work inspired by the movement of a disembodied dancer. I thought about shadows and light, the tricks they play on us, and how these images could influence the form of the music. This piece starts small, growing to a tutti fortissimo. It runs through a gambit of light and dance inspired motives. It stops and restarts and dance often does. But most importantly for me, it is music inspired by movement.” – Patrick Harlin

Description: The abstraction>> electroacoustic improvisation series is the result of a collaboration between local musicians Philip Snyder (flute) and John Kammerer (laptop). Snyder’s musical interpretation of the poem Casabianca by British poet Felicia Dorothea Hemans provides the sound palate from which Kammerer draws to create ethereal soundscapes, progressive loops, and glitchy variations. abstraction>> is a uniquely spontaneous sonic experience that is never the same and always captivating.