Presented by Playbill at Online/Virtual Space 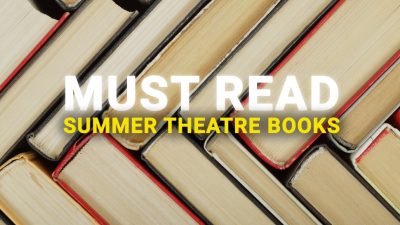 From biographies and memoirs by some of the stage’s most influential people to career advice and retrospectives, there’s plenty of summertime reading to be found in this list of theatre reads.

With social distancing still the norm, there’s no better time to crack open a book—especially one that lets us escape to the world of theatre. From biographies and memoirs by some of the stage’s most influential people to career advice and retrospectives, there’s plenty of summertime reading to be found in this list of theatre reads.

The Kilroys List, Volume Two: 67 Monologues and Scenes by Women and Nonbinary Playwrights
By The Kilroys, with a foreword Lynn Nottage
The Kilroys, a collective

With social distancing still the norm, there’s no better time to crack open a book—especially one that lets us escape to the world of theatre. From biographies and memoirs by some of the stage’s most influential people to career advice and retrospectives, there’s plenty of summertime reading to be found in this list of theatre reads.

The Kilroys List, Volume Two: 67 Monologues and Scenes by Women and Nonbinary Playwrights
By The Kilroys, with a foreword Lynn Nottage
The Kilroys, a collective group of writers and producers based in Los Angeles, returns with a new slate of theatrical speeches by women and nonbinary playwrights. Among those represented are MJ Kaufman (Eat and You Belong to Us), Jocelyn Bioh (School Girls; or, The African Mean Girls Play), Lauren Yee (Cambodian Rock Band), and Celine Song (Endlings). In addition to recent works, the list includes monologues from the 2017 edition, offering a wide range of works to enjoy. Available now from Theatre Communications Group.

The Mikado to Matilda: British Musicals on the New York Stage
By Thomas S. Hischak
Looking back at over 250 years of theatre, Hischak explores the many London productions that have found their way across the pond. Each musical is dissected from its success in England to its reception in the United States in addition to a deep dive on the show’s plot, songs, creative team, casts, and more. Among the shows investigated are Tom Jones, Oliver!, Evita, Chess, Mamma Mia!, and Billy Elliott, in addition to dozens of lesser-known musicals. Available now from Rowman & Littlefield Publishers.

The 24 Hour Plays Viral Monologues: New Monologues Created During the Coronavirus Pandemic
By The 24 Hours Plays, edited by Howard Sherman
Since March, The 24 Hour Plays have presented weekly editions of the quarantine-friendly Viral Monologues, in which actors and writers are matched to create a short piece of theatre in less than a day. While not all of the pieces are directly about COVID-19, they are presented within the parameters inevitably set by the pandemic. This collection of monologues features pieces from the first three weeks of the series by Jesse Eisenberg, Clare Barron, Hansol Jung, Christoper Oscar Peña, Monique Moses, and more. Available June 25 from Methuen Drama.

The Memory Marketplace: Witnessing Pain in Contemporary Irish and International Theatre
By Emilie Pine
Using examples from around the world, Pine explores what it means to use memories on the stage—both painful and happy, societal and personal. Beyond the histories of the past itself, The Memory Marketplace dives into the ownership of narrative, the audience’s impact, and how a shared experience of a memory can alter its public perception. Available June 30 from Indiana University Press.

Climbing Rejection Mountain
By Nick Wyman
Broadway alum and former Equity President Wyman (Network, Catch Me If You Can) offers tips and tricks on how to find an agent, land auditions, and maintain your confidence. Especially useful for teens and college students looking to get their foot in the door, the book—filled with fun anecdotes and cartoons—is also great for career professionals looking to get a sneak peek at the industry from a longtime insider. Available July 1 from Applause.

Thrown Off Script: Turn Interruptions Into Opportunities and Thrive in the Unexpected
By Mike Domeny
Improv actor Domeny takes what he’s learned on the stage and written a book to help anyone get along in life. Readers will find useful advice on how to overcome fears and doubts, stop feeling stuck, and recognize interruptions as opportunities for growth, all while enjoying the author’s signature brand of humor so that they can become a master improv artist at life. Available July 1 from Author Academy Elite.

The Understudy: A Novel
By Ellen Tovatt Leary
Nina Landau is an actor and mother struggling to balance her career and personal life in the heady days of the 1970s on Broadway. Through her eyes, readers experience the backstage world of theatre, from nerve-wracking auditions to the male gatekeepers that hold the fates of many in their hands. In this novel, Leary paints a portrait of what it means to have a stage career with all of its ups and downs. Available July 1 from Hansen Publishing Group.

Victorians on Broadway: Literature, Adaptation, and the Modern American Musical
By Sharon Weltman
Looking at the phenomenon of popular Victorian era-set musicals like Sweeney Todd, The King and I, and Oliver!, Weltman examines these stage productions and their influences from literature by the likes of Charlotte Brontë, Charles Dickens, and Robert Louis Stevenson. Using her expertise in the field and interviews with Broadway luminaries such as Stephen Sondheim, Weltman paints an in-depth portrait of the debt the Great American Musical owes to the melodramatic stories of the 19th century. Available July 20 from University of Virginia Press.

Writing in Coffee Shops
By Ryan Craig
In this guide, British playwright Craig shares his experience in the theatre industry and as a National Theatre Studio teacher. Acknowledging the challenges and mechanics of being a writer, Craig offers practical advice on how to write plays and scripts with a modern approach. Available August 1from Oberon Books.

Ever After: Forty Years of Musical Theater and Beyond, 1977–2019
By Barry Singer
Originally published in 2003 as a detailed history of the past quarter century in musical theater on Broadway and off, this updated edition includes the highlights and hidden gems of the stage from 2004 to the present. Available August 15 from Applause.

Lucid Body: A Guide for the Physical Actor (Second Edition)
By Fay Simpson and Eleanor Rose Boynton
This step-by-step guide takes performers through the phases of self-awareness that expand emotional and physical range not only on stage, but also in daily life. This new edition includes a more diversified range of playwrights, non-binary language, and new chapters on stage intimacy protocol and physical listening. Available August 18 from Allsworth Press.

Magic Time, A Memoir, Notes on Theatre & Other Entertainment
By Edwin Wilson
As the Wall Street Journal’s theatre critic for over 20 years and a longtime theatre textbook author, Wilson writes a memoir that embodies that passion and the power of live theater. Whether writing his own plays, experiencing My Fair Lady on Broadway with Rex Harrison, teaching at Hofstra University, or serving as President of the New York Drama Critics Circle, this is the story of the ultimate theatre lover. The book also includes a collection of the author’s reviews to travel back in time to some of theatre’s best moments of the ’70s, ’80s, and ’90s. Available August 25 from Smith & Kraus.

Ann Miller: Her Life and Career
By Peter Shelley
From a child in actor Hollywood to a major comeback on Broadway, Miller’s story is told with care, highlighting not only the performer’s biggest achievements but also her intimate personal moments. Known for her incredible dance skills in addition to her acting prowess, some of Miller’s most memorable films include Easter Parade, You Can’t Take It With You, and On The Town. On stage, she starred in Sugar Babies (earning a Tony nod) and Mame, among others. Available August 30 from McFarland Publishing.

My White Best Friend: (And Other Letters Left Unsaid)
By Rachel De-Lahay
Originally commissioned by London’s The Bunker Theatre as a festival in 2019, writers created a series of letters that look at racial tensions, queer desire, and much more. Among the writers are Jasmine Lee-Jones, Inua Ellams, Jack Thorne, Lena Dunham, and Rabiah Hussain. Available September 1 from Oberon Books.

Oklahoma!: The Making of an American Musical, Revised and Expanded Edition
By Tim Carter
This exploration of one of America’s most beloved musicals from Rodgers and Hammerstein is expanded upon using the Rouben Mamoulian Papers at the Library of Congress in addition to newly found correspondence, contracts, and annotated script used. To paint a fuller biography of Oklahoma!, Carter also dives into the key players, including its source material: Lynn Riggs’ play Green Grow the Lilacs. Available September 1 from Broadway Legacies.

Understanding Tracy Letts
By Thomas Fahy
Gain a deeper appreciation for the Pulitzer- and Tony-winning playwright of August: Osage County, Mary Page Marlow, The Minutes, and Linda Vista, the latter two of which were performed during the 2019–2020 Broadway season before the shutdown. Exploring Letts’ emotional power and cultural commentary, Fahy presents one of the first books to offer an engaging analysis of the playwright. Available September 4 from University of South Carolina Press.

American Utopia
By David Byrne and Maira Kalman
Following its Broadway run in the fall of 2019, the Talking Heads frontman and illustrator Kalman came together to bring the show’s message of hope, pathos, and humanism to book form. Using the song’s lyrics and drawings, American Utopia is an uplifting reminder that all is not lost in the world we live in. Available September 8 from Bloomsbury Publishing.

Twenty-Five Years at the Public, A Love Story
By Paula Scher
For over 25 years, Scher worked with New York’s The Public Theater as their graphic designer. In this memoir, the artist unveils her relationship with the Off-Broadway institution in the shaping of the performing arts company’s visual identity. Available September 15 from Princeton Architectural Press.

All books are accessible online